A month ago it was decided that the shit show would go on the road on September the 13th. Friday the 13th to be precise.

I mean why not? It’s the perfect day to be awesome in a town where you don’t have to worry about other’s opinions.

Many were invited but only eight made the decision to go – Nikki, Danny, Tiffany, Laura, Beth, DJ, Korey and myself. With Clark of course waiting(impatiently) in Peoria for our arrival.

The week leading up to the trip everyone was filled with anticipation and of course stressing me out on what time we were leaving, where we were meeting…I mean shoot so many questions you’d of thunk that I planned this trip….

So it was decided that we would meet Friday around 5 at Beth’s. Of course some people didn’t get off until five which is fine had they packed their shit in advance…I’m looking at you Donna Jo! So Dj got there at 6:30 and we hit the road around 7 after a pit stop at a gas station.

I wasn’t allowed to drive my car on the way there so Danny drove myself and Nikki. Laura and Tiff rode together, while Dj drove Beth and Korey.

At this point I’m sure you’re all DYING to know what Illinois smelled like well here is a list!

Once we got done playing ‘What’s That Smell!’ It was send pics of your car ride time! 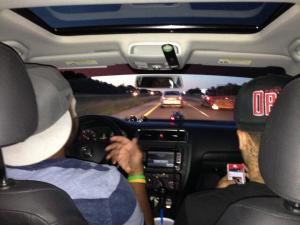 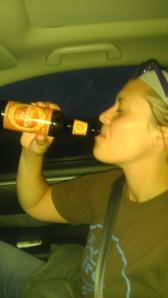 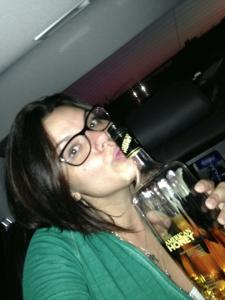 I mean she ain’t really drinking that in the car without a chaser! Well I take that back she might be Beth is a tough cookie! 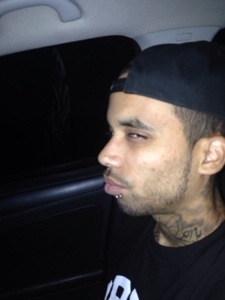 To then receive a not so happy pic of Korey 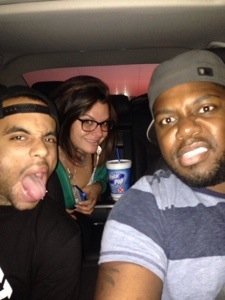 A whole car of happy people

We responded just as happily!

About the time we were right by Springfield it was like everyone’s bladders synced because bitches started going bat shit crazy about needing to go potty!

So we made a McStop! Everyone pottied, got food and did shots in the parking lot in a record probably 10-15. I almost fell in the parking lot and died without a sip in me but it’s fine! My car made a quick stop over at the gas station across the street so I could get a strawberita to get a good buzz going. Shocking who do we run into? none other than the same gas station attendant that eyeballed Laura during our last visit.

I took a pic of her from the car because she was not friendly and a close up shot would have broken my camera!

We continued on our journey which actually didn’t take that long but by the time we were like five minutes from East Peoria we got stuck in random 9pm traffic. Which of course everyone hated.

So we get to the hotel and go to check in to find out our reservation was no longer with that hotel but with another across town. The girl working said we got bumped but they should have let us know, which of course they didn’t. I asked if they had any openings for us and she said she could try. She checked and they weren’t going to give us the discount so it was back to the cars and onto the hotel we got moved too.

Checking in there was simple and it was actually nicer than the other so I’m not mad about it. We started pregaming and getting ready for the night ahead 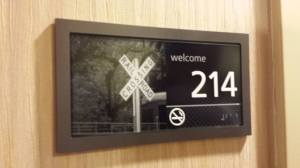 Just a fancy little picture for our room!

So Laura was going to rock this outfit and when she went to show DJ he said no not happening…I was pretty upset because this would have killed!

Once everyone was ready to go and after my shots of American Honey we were on the road to Club Diesel!

On the elevator ride we made sure to write the room number and the name of the hotel on Laura’s arm in case she disappeared it was smart thinking!

It was decided that upon arrival that we would be a bachelorette party so we could get in free. It worked, sort of! The girls were free and boys paid a dollar. Can’t be mad about that!

Before we went in we got a pic of the lady behind us she was twerking by herself in that big ole coat!

Just a group shot! I kept staring at it wondering where is Laura and then I remembered she took the first one!

These hoes couldn’t wait to get on the pole! 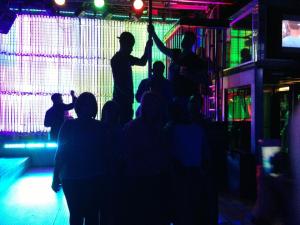 A non flash group shot…seriously who was in charge of this pic?

Drunk ass turned the flash on! I think this was that ratchet girl…

Then we got a group shot off the pole once again that fucking flash is not on!

However this is the result with it on…so obviously we looked cooler with it off!

Then quickly jumped in and photobombed this picture! 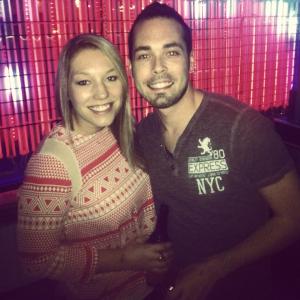 The window’s riding the crimson wave

Well as you can tell…photobombs were cropped out

Not sure why Tiffany’s legs are so far apart…

Can we talk about Nikki’s broken neck?

Bridesmaids vs The Hangover…basically the greatest picture ever! 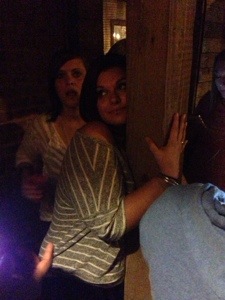 Sometimes you just have to hug a pole! A larger wood pole! 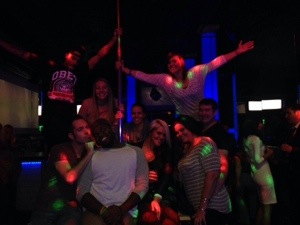 We are going to have to start a screening process before letting people take pics of us!

Then a what the hell one because the guy just snapped a third…you can tell who was ready for this…thats why they at the front of the class!

Clark made me take a second pic because she wanted to be in it…doing whatever she’s doing…being inquisitive?

So we decided to check out the bar next door…once again bachelorette party! Girls in free, boys $5 bucks…better than $10

I went up to the patio upstairs at Berlin and made several librarian friends. I went to use one of the bathrooms and they told me it was VIP only…I mean clearly they don’t know I’m VIP…shame so I used the lesser bathroom. 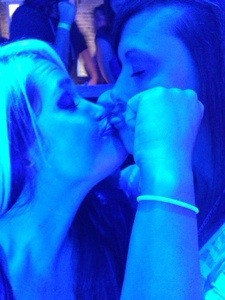 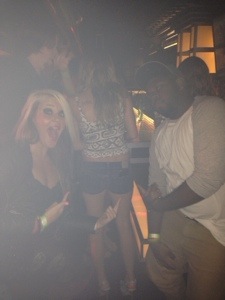 Apparently we all need to see her Daisy Dukes! 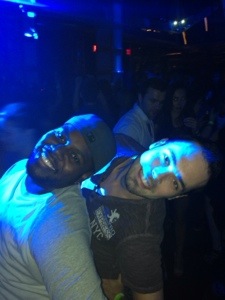 Nikki’s broken neck is spreading…that guy in the background aint feeling it! 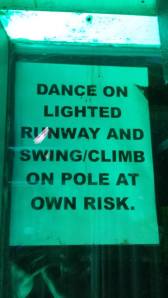 An important sign considering Danny crushed his nuts on the stripper pole and gave himself a nice bruise on his arm.

So this bar has this giant disco ball. Like the largest ever or something. Anyways I was drunk and I was really afraid Final Destination 6 was about to take place! It was pretty serious!

We left the bar around 2 to go back to Diesel. Some people went to this little shack to get some street meat while I went straight to the bar.

I didn’t know this guy I kept calling him Alpaca…and I made him buy me a shot! It was bad…real bad 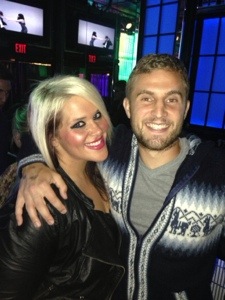 Nikki wanted a pic with him as well!

I was outside talking to people making some friends when Danny comes up to me and says that everyone left!

‘They all left together?’ -Me

I was too drunk to comprehend that this occurred.

Bitches really all left together and squeezed into one car! Without even saying bye! Rude!

So I danced in the cage and I don’t really know how Clark managed to get decent pictures because I was falling all over the place. Sorry not sorry!

I ran into a girl that looks like Emily Rose Mollet! I was excited about it she looks kind of uncomfortable.

When the bar closed we left and ran into Clark and I’s friend Rachel on the street corner. The guy she was with was a little moody he needed to lock it up!

On our drive back they decided they wanted Steak n Shake…which of course was closed! So we drove to McDonald’s which was open. We ordered mind you there were three of us…Clark ordered two hash browns…I asked for one and Danny asked for another. We pull up to the window and they’re like cash only like that’s information you need to release before ordering not when you get to the window! 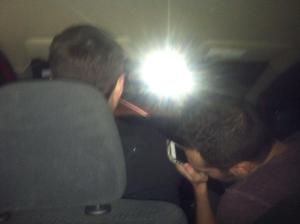 This was us on the way back to the hotel finally…Danny is clearly spent!

We ate in the lobby and literally going through the contents Clark freaks out because her hash brown was missing…We kept explaining to her that she never ordered it and she was not having it!

Clark – Danny and I both can confirm you never ordered yourself a hash brown!

We went upstairs to sleep and it was filled with two great moments!

1. My drunk ass took this pic because when I looked over at Nikki she was super frowning in her sleep. Like it was a gigantic frown! I announced it to loudly and she rolled over as I took it! Rude!

2. When I was crawling into bed I woke Laura up to tell her that I was stealing her cuddle pillow. She woke up and I quote ‘All I taste is chili, cheese & onions… I’m gonna throw up!’

We all lost it, it was so funny!

When I woke up in the morning Nikki and Laura were gone. They got up at 7 and left…I was dead at 7 am! We didn’t even get up until like literally almost 11. 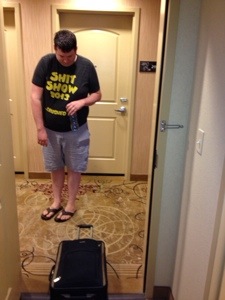 I was really not prepared to greet the day in any way shape or form!

Just a little message from the hotel elevator it wants us to visit again!

In the morning Clark, Danny and I went to Avanti’s for lunch because I fucking love the Gondola so much. It was delicious but I was too hungover to eat all my food. When we were done Danny and I hit the road. I was driving because someone couldn’t!

Just a shot of me driving…my mouth was so dry lol probably should have closed it!

We got word that there was traffic…bad traffic

The smokers in that car got creative since they couldn’t smoke in DJ’s car!

Pretty much the only awful thing about the traffic was that everyone had to poop…I for one had to go real bad! But I made it to STL and we all pooped Happily Ever After…

Until next time Peoria!